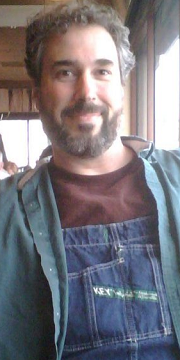 I started this joint because I had the need to express my opinions on a java style guide. Later, I added some java forums. Just a wacky thing. Bla bla bla about Java, and lots of folks showed up!

I spent some time working as a Java contractor. I have worked in about twenty-some languages other than Java, but I am quite the Java bigot now. I started in the 70's with BASIC, then added some 6502 assembly. Then I moved up to Pascal and 8088 assembly. For about a year I was nuts about Modula-2. Then I moved on to C/C++ and more assembly. In 1994 I wrote a terminal emulator called BananaCom. In an attempt to mash that over to windows, I converted the whole thing to Java. I've been hooked ever since.

In a completely different direction: In the early 90's I became obsessed with gardening and all forms of horticulture. In 1994 I gave a presentation on lawn care and wrote some blurb for the occasion. In 1995 I posted it to the internet, mostly to see what that might be like. It became crazy popular. You can see the lastest version of that lawn care article here (note that it is a jsp page!).

More recently I became nuts about permaculture. I wrote about meeting my hero Sepp Holzer and pushed a bunch of stuff about rocket mass heaters out to the mighty youtube. I now host a permaculture design course in montana.

Paul Wheaton working on the ground systems for the spacecraft that takes pictures for google earth in 2000.

Lately I've been crusading the use of cast iron and reducing the panic surrounding flea control. I've also advocated the use of diatomaceous earth for all sorts of insect control. My recent article on raising chickens turned out to be rather controversial.

I have recently moved back to missoula, montana. I've even started a missoula blog. And I have a lot of controversial things to say about light bulbs and electric heat.

For most JavaRanch stuff, you really need to take things up in the forums. Probably the ranch office forum. You will probably get help about 20 times faster than anything else that way. The link at the bottom that says "contact us" probably has the most relevant information for solving problems. But if you've gone through all of that and still need to contact me, try: